Suffolk – A Rare Gem of England

The shorter edited version of this article was first published in Singapore’s The Straits times in September 1996.

For Singaporeans who enjoy a quiet holiday away from the madding crowd and would like to be in harmony with nature, a stress-free motoring holiday through Suffolk, and the neighbouring county of Norfolk, is a wonderful way to rejuvenate oneself and to imbibe the true beauty of England.

Most Singaporeans holidaying in England would invariably join a package tour and head for the well-traversed and world-renowned places like London, Oxford, Cambridge, Stratford-on-Avon, the Lake District and the West Country, to name a few.

However, according to a recent British Tourism Authority survey, the more adventurous Singaporean visitors now prefer to tour England on their own, as this will allow them more flexibility to explore the less familiar places and to do so at their own pace, instead of joining the more convenient but somewhat regimented escorted holiday.

To the discerning traveller, the quintessence and glory of England is best reflected in its countryside, which is picturesque, tranquil and unchanging.

In every old market town and historic village, of which there are many spread all over the country, it has something to offer a visitor: a stately home, a well-maintained ancient parish church, a ruined castle and a charming village green.

The countryside which surrounds these towns and villages is often a perfect setting for nature rambling, picnics, bicycling, horse riding or other outdoor activities.

A good and varied selection of comfortable accommodation is available to suit all tastes and pockets. They range from modern boutique hotels to atmospheric country inns and homely bed-and-breakfast establishments run by families where one is treated more like a guest than a paying customer.

On our last trip to England, we decided to see a part of the country which we had, hitherto, passed over in favour of other preferred places.

After pouring through various guidebooks, travel stories and maps, we decided to spend a three-day weekend on a leisurely motoring holiday through the celebrated Constable Country, in County Suffolk, a Mecca for lovers of English art.

Suffolk, situated in Eastern England, was part of the medieval Kingdom of East Anglia. It is particularly noted for its quaint villages and small towns.  Its neighbouring counties are Essex, Cambridgeshire and Norfolk. Suffolk is largely agricultural in character and there are hardly any heavy industries to compromise its rustic charm.

From London’s Heathrow Airport, one can conveniently hire a car and be in Suffolk in a little more than one hour. The drive is pleasant and fast-moving along the motorways. The British, like Singaporeans, drive on the left hand side and their traffic rules are substantially similar to ours.

The Constable Country has delightful towns and villages such as Flatford, East Bergholt, Dedham, Hadleigh, Kersey, Lavenham, Sudbury and Nayland.  They are all steeped in history and tradition and rich in green meadows and dreamy pastoral scenes. The famous River Stour, which is famed for trout fishing, runs through it.

It is so named in honour of England’s greatest 19th Century painter of country scenes, John Constable (1776-1837). He was born and bred there and many of his well-known paintings depicted scenes from this region. Constable’s artistic genius was largely inspired by his beloved native land. He once said: “Painting with me is another word for feeling, and I associate my careless boyhood with all that lies on the banks of River Stour; these scenes made me a painter.”

The Constable country was once highly prosperous because of wealth derived from the wool trade with Continental Europe in from 14th to 16th centuries. The wealth so generated has left an indelible legacy of resplendent Tudor architecture, of the 15th and 16th centuries, which is well-reflected in magnificent churches and dwelling houses adorning its towns and villages which now seem too small and remote to support such splendours.

Our first stop was East Bergholt, the birthplace of Constable. It has a 16th Century church where he used to worship and where his parents are buried.  The Church was commissioned by Cardinal Wolsey, the disgraced senior adviser of King Henry VIII. The church tower was never completed, possibly due to lack of financial resources after Wolsey’s fall from power..

Constable’s father once owned a mill in the village of Flatford. Across the stream from the mill is  Willy Lotts’ Cottage, the subject of one of Constable’s most famous paintings, Millstream, and home of the painter’s friend. The cottage has been meticulously preserved and is much visited by tourists and art lovers from all over the world.

The village scene at Flatford Mill remains largely the same as depicted in the artist’s celebrated painting, which is now displayed at the Christchurch Mansion Museum in Ipswich, the country town of Suffolk.

Our next stop was Lavenham, the most splendid and well-preserved of the Suffolk wool towns. It has a lovely collection of Tudor houses and buildings of superb timber, including the town hall, which now houses the local history museum, and the school where Constable was a pupil. To take a leisurely stroll here makes one feel as if one is being transported back in time to the England of the Middle Ages.

Kersey, a village of unrivalled beauty and serenity, is simply a gem and a joy to behold. Although much trodden by outsiders, it is completely unspoiled, with hardly any noticeable signs of commercialism. We were most amused to discover that the main street runs through a water-splash where ducks and geese are accorded the right of way over motor cars!

Sudbury, the hometown of another great English portrait painter, Thomas Gainsborough (1728-1788), was yet another delightful historic market town well worth a visit. His towering statue proudly stands in the middle of the town hall square. We were, however, most disappointed that, the Gainsborough Museum, which has one of the best collections of the artist’s works in England, was closed when we were there on a Sunday.

Be that as it may, our spirits were lifted at Nayland, a charming little town with its own medieval church and a largely 19th Century main street. One of Constable’s only two paintings of religious themes hangs above the church’s altar. The other is at the parish church in East Berholt.

For those who enjoy visiting stately homes, ancient cathedrals and churches and ruined castles, the Constable Country is full of them. With limited time, one should be judicious in the choice of places to visit, and avoiding those with lesser appeal or significance.

The residents of the Constable Country are generally very cultured, courteous and genteel, and they are most helpful to visitors, especially when approached for directions. Its market towns and villages are pristine and have a garden-like appearance, in marked contrast to the less neat and tidy English cities.

Driving within the Constable Country is a breeze; motor traffic is well-disciplined and distances between one place and another are rather short. The scenery is soothing to the eyes as it is varied. There are also secluded scenic spots for ideal picnics and for vista gazing.

One is spoiled for choice for accommodation here: hotels, farm houses, converted castles, and country inns with character and considerable antiquity. The cost usually includes a substantial English breakfast, served with fine chinaware.

We chose the old coaching inns throughout our three-night stay there. It was an exhilarating and novel experience to sleep in rooms which were 300 to 400 years old, and which perhaps, were once slept in by none other than Charles Dickens, John Keats or Oliver Cromwell.

Some of these old inns are, however, said to be notoriously haunted, including one of the three where we stayed the night.  Fortunately, for our peace of mind, we only found this out (in a local guidebook) after our departure.

English food, which does not rank as one of the world’s great cuisines such as Chinese and French, was, however, of a very wholesome and good standard in some of the better restaurants in this area. The menus were reasonably priced and really good value for money compared with the inflated Western food prices in many Singapore eateries. They cost even less at lunch compared with dinner.

For Singaporeans who enjoy a quiet holiday away from the madding crowd and would like to be in harmony with nature, a stress-free motoring holiday through Suffolk, and the neighbouring county of Norfolk, is a wonderful way to rejuvenate oneself and to imbibe the true beauty of England. 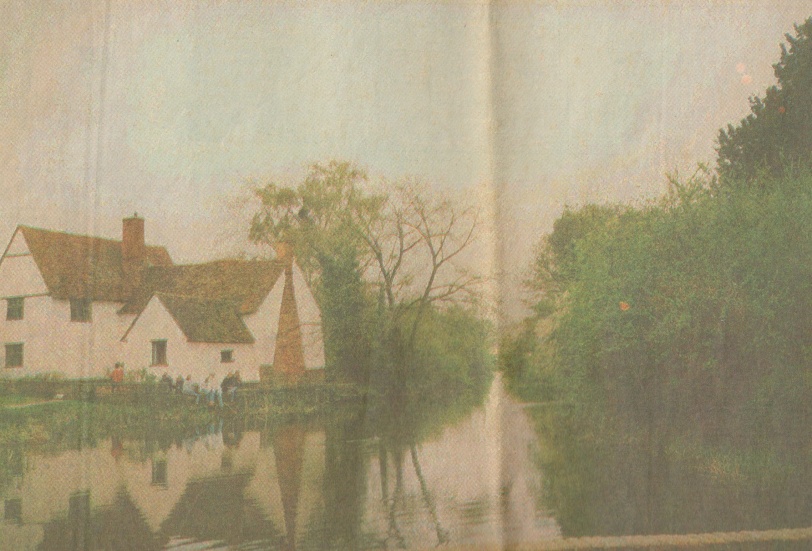