Greece – The Cradle of Western Civilisation

The shorter edited version of this article was first published in Singapore’s The Straits Times in August 1997. 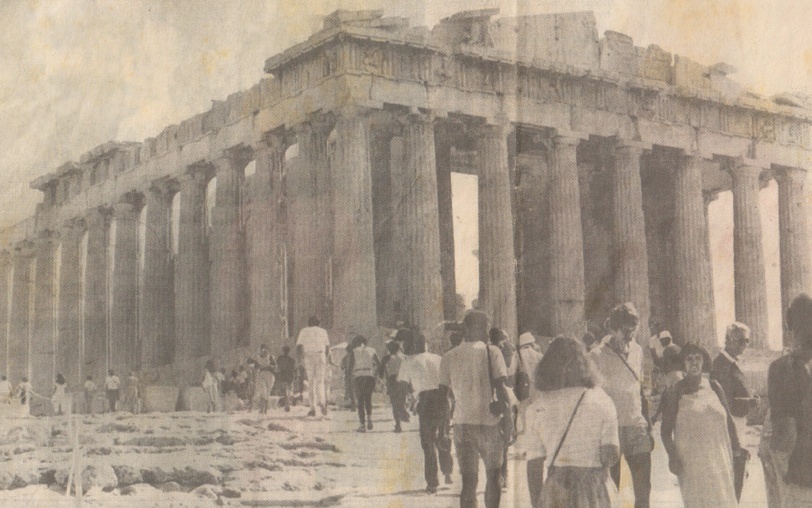 Whenever one thinks of Greece, the names of Homer, Socrates, Aristotle, Euclid, Archimedes and Sophocles immediately spring to mind.

Acknowledged as the birthplace of Western civilisation, it is the progenitors of Western literature, philosophy, political concepts and drama. It played a pivotal role in the developement of mathematics, Western architecture, medical and other sciences, and also pioneered the Olympic Games.

Its ancient gods and goddesses, such as Apollo, Artemis, Hermes and Poseidon, and their exploits are well-known to students of Western culture; and their myths are further enshrined in the names of spacecraft, edifices, upmarket merchandises and other human endeavours requiring instantly recognisable icons.

The Greek capital, Athens, is one of the most celebrated and trodden cities in the world. When one marvels at the country, one invariably refers to the sophisticated culture carefully nurtured in this city during the Classical Period (500-323 BC).

Greece has had a most turbulent history. It was colonised successively by the Romans, the Byzantines, the Latin Crusaders and the Muslim Turks for 2 millenia before gaining independence from the latter in 1830.

While the Greeks have, long ago, forgiven the other foreign conquerors, their deep-seated hatred for the Turks is equalled only by their erstwhile colonial master’s contempt for them.

Despite almost 400 years of Turkish rule, not many visible signs of it remain; most mosques have been converted into churches or other uses, with their minarets removed. However, the influence of the Turkish cuisine and certain ways of life are clearly discernible.

The first sight of Athens is likely to disappoint many visitors. It is nondescript and un-prepossessing in appearance, somewhat devoid of obvious charm and character. Many districts resemble a collection of overgrown market towns and villages haphazardly fused together.

Athens is, in essence, a tale of two cities and cultures due to historical reasons. At the Constitution Square, the fashionable part of town, with its Government buildings, commercial offices, quality shops and posh hotels, it has the air of a big provincial European city.

But, seen from Omonia Square and Monastiraki, barely a kilometer away, its ambience is unmistakably Middle Eastern, vibrant, colourful and noisy, with their narrow streets and side lanes thronged with humanity day and night.

A city approaching 4-million, we were immediately struck by its chaotic traffic congestion, made worse by the extension of the underground subway system. The roads were being dug up sometimes in a zig-zag manner, revealing old ruins with unfailing regularity. The law requires that all such road works must stop immediately, pending investigation and authentication of the ruins by the archeological authorities.

The Greek drivers are generally aggressive and pay scant regard to the safety of the other road users. Many would not stop at pedestrian crossings, and indiscriminate parking on pavements is common. It is not surprising that the country has one of the highest accident rates in Europe.

Despite this hazard, Athens is a very safe city for both men and women. The Athenians simply adore nocturnal life, and the main streets are seldom deserted even in the wee hours of the morning.

A highly religious people, they have a close-knit family system which provides comfort and support in times of need. We were told that these factors had ensured that the capital was conspicuously free of beggars and homeless people, which are common sights in many Western cities.

The Greeks are warm, helpful and hospitable to visitors. However, their seemingly stern and unsmiling exterior sometimes makes them appear surly or arrogant. To correct this perceived image, a campaign was launched urging them to smile more readily as this would be good for the economy.

What then is the magnetic appeal of the country and especially its capital? The answer is simple. The tourists come primarily to see the glory of Athens’ Acropolis, more specifically the Parthenon, the symbol and soul of Greece, and the other antiquities in and outside the city.

The country is also famed for its myriad of idyllic islands, which are further enhanced by the azure waters of the Mediterranean Sea and the clear blue sky above. To many, these islands are the nearest thing to paradise.

A unique architectural masterpiece constructed wholly in white marble in the 5th century BC, the Parthenon, a Greek temple, is the most prominent and awe-inspiring structure on the Acropolis, a sacred rock formation which rises 160 meters above sea level. It dominates the old Athens.

It originally housed the exquisite statue of Goddess Athena, from whom the city derived its name, and was decorated with exquisite friezes, sculptures and statues. Its sublime beauty, greatly accentuated by the gracefulness and the perfect proportions of the classical exterior, leaves an indelible imprint in one’s mind long after the visit.

Converted into a mosque by the Turkish conquerors in 1460, it was later used as a warehouse for gunpowder. Unfortunately for posterity, when the Venetian forces attacked Athens in 1687, its cannon shots scored a direct hit and severely damaged it. It was left as ruins but subsequently partially restored.

In 1801, Lord Elgin, the then British ambassador to Turkey , persuaded and was granted permission by the Turkish Government to remove 51 priceless sculptures mainly from the Parthenon, for which he incurred a total expenditure of 75,000 pounds sterling, a princely sum in those days.

He later sold these pieces to the British Museum in London for a nominal amount of 35,000 pounds sterling in order to defray part of the costs he had expended. The Museum then named them the “Elgin Marbles” in his honour.

After independence, the Greek regime, which does not recognise the Turkish occupation of its territory as legitimate, repeatedly sought the return of the national treasures from Britain, but without success.

It is quite understandable that the Greek people have yet to forgive the British and the Turks for the irreplaceable loss of their national heritage.

Among the ancient civilisations, China, Egypt, Italy and Greece have suffered the greatest losses of their national treasures, often under dubious or questionable circumstances. Many have found their ways into both public and private collections of newer civilisations, especially in the more affluent West.

At the foot of the Acropolis stands the remains of the ancient Agora — the administrative, judicial, intellectual and commercial hubs of Athens during antiquity. One can visualise men like Socrates and Plato expounding passionately their then radical views on philosophy or politics there to mixed audiences of admirers and detractors.

The Theseion, at the top of the Agora, is the best preserved ancient Greek temple in the country, with its original roof and columns largely in place.

The other “must-see” famous landmarks include the ruins of the Temple of the Olympian Zeus (completed in 2nd century AD), the Theatre of Dionysos (5th century BC, renowned for the staging of tragedy plays), the Archeological Museum (which houses an unsurpassed collection of Greek antiquities) and the Panathenaikon Stadium (where the first modern Olympic Games was held in 1896).

The best place to soak up the flavour of old Athens is the Plaka, which has many 19th century houses and shops, interspersed with quaint Byzantine churches (11th-13th centuries), with their renowned paintings on mosaics with biblical themes on the walls and ceilings.

This area, now a tourist attraction, has a labyrinth of atmospheric streets and alleyways of peasant-like simplicity, replete with taverns and cafes, which were once reputed for their folk music, dancing and simple fare.

Using Athens as the base, one can cover many of the other famed archeological sites as these are within a day trip coach distances from the city. They date mainly from the 16th to 5th centuries BC.

These relics include the Oracle of Delfi, the palace-fortress of King Agamemnon in Mycenae, the Acoustics Theatre of Epidaurus, the stadium in Olympia where the first Olympic Games was staged more than 2700 years ago and the Temple of Poseidon at Cape Sounion.

It is unthinkable to leave Athens without taking a delightful island-hopping cruise from its picturesque port at Piraeus. We took a whole day 3-island cruise and was completely smitten by the serenity of Hydra.

An extraordinarily beautiful and mountainous island, with many houses painted in white and blue (the colour of the Greek flag) and built-in amphitheatre-style, it is a favourite retreat of internationally known artists and writers. It is also much used by Hollywood for locale-shootings in many of its productions. Relatively unspoilt, it still manages to retain much of its quintessential Greek village charm and is free of vehicular traffic. Well done!

The most suitable time to visit Greece is between April and May. June to September are to be avoided, if possible, as the popular spots there will be swarmed with hordes of tourists of all shapes and hues and the weather will be too hot for comfort.

13 thoughts on “Greece – The Cradle of Western Civilisation”