A Short Stint in Beijing, a Summer of Discoveries

An article by guest writer Mark Phong. Refer to “About the Writer” at the end of the post.

China, also referred to as the Middle Kingdom, the land of my forefathers, and a place until 2 short years ago, I had never visited. Having spent a good part of my formative years away from Singapore and being relatively well-traveled, having never been to China appeared to be quite a glaring omission on my part. Now in the summer of 2012, this was about to change.

I was in the middle of completing my MBA in Singapore, when an internship opportunity with a Chinese venture capital firm (Kaiwu Capital) based in Beijing arose. Considering the opportunity, I was both very excited and at the same time quite apprehensive. For while I had a Chinese face, having spent a good part of my years growing up in the UK and the USA, I was unfortunately also what some termed as a “Banana”. So how would a Banana fare in a competitive Chinese work environment and more importantly what would it be like to live in Beijing? From not ever having stepped foot in China, I was now going to have an opportunity to live there for 2 months.

After some consideration, and a new crash course in mandarin for business, it was off to Beijing I went.

Coming in from the airport into Beijing, the very first experience I had was the smog. Sitting in a taxi on my way to the city, I was struck by the low level, but detectable level of haze in the air. If you are not used to it, it leaves a certain biting sensation in the back of your throat, not good if you are mildly asthmatic.

The pollution can be easily observed from the office, since it was on the 30th floor. I took the same photo below on different days, one a “regular” Beijing day and another day, immediately after it rained.

On a clear day after it rains, the skyscape of Beijing is actually quite pretty. However there are some days, where you can barely see 2 meters outside the window.

My little rented apartment was located near the center of the city, near Guanggimentiao, a part of the city where the subway was still under construction. My nearest subway train was a 25 min walk away, at Jianguomen, which is also where the office was located. The HR at my office very nicely helped me get a “black” cab that would pick me up on 4 out of the 5 workdays at 8:30am. The one day gap per week with no transport was due to the City’s anti-pollution control measure where each car has a mandatory day off the road in the city. It also meant that the rest of the time in Beijing, I got to walk around, a lot!

Walking Tour of the City

Walking from my apartment to the center of city and the subway line at Jianguomen was a great way to see the city in a more up close and personal way. It allowed me to take in the sights, smells and sound of Beijing at a much more personal level. My route would take me along a river that runs through the southern side of Beijing. 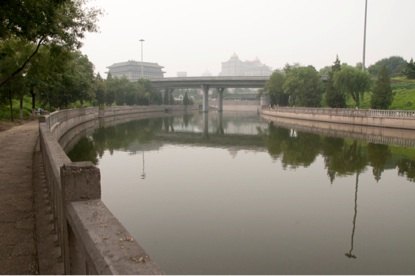 I was told that Beijing had been rebuilt considerably for the 2008 Olympic games. The city however was sprawling and huge and I soon discovered that “1-block” in Beijing was equivalent to walking 2-3 blocks in other cities like New York City. The avenues and boulevards of Beijing were very broad, some even had 8 lanes of roads separating the two sides. This made walking around very challenging. In addition, unlike in most other countries, the “green-man” for pedestrians does not give you right of way crossing the road. Instead it’s a signal to watch out for the crazy fast cars coming from your left and right that will be hell-bent on completing their turn, with or without pedestrians in the cross walk.

I found that Beijing was a city of contrasts with modern sky scrappers interspersed with more traditional and refurbished Hutong (ancient alley) and Siheyuan (ancient courtyard building) and amazingly old dilapidated slum like buildings. 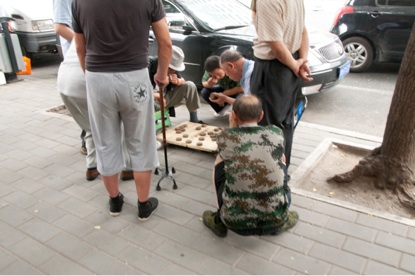 The city of Beijing was quite an amazing city to experience and it’s quite a city of contrasts. An eclectic collection of ultra modern buildings, interspersed with architecture that is also very old and traditional. However every city is just a collection of buildings and strangers, without having people to experience it with.

I was very fortunate that an INSEAD classmate of mine Mr Jay Su was also in Beijing at the same time as me during this summer period. Otherwise meeting new people in a foreign city like Beijing would have proven difficult. Through Jay’s introduction, I met a wonderful group of fellow MBA interns, who were all doing their internship at J&J’s pharmaceutical arm Jensen in Beijing.

We were all alike in many ways, and all shared the same circumstance of being in a foreign city without really knowing any locals very well. I was very fortunate to get to know them, and we were soon meeting regularly after work and during the weekends.

Besides the companionship of like-minded people, the other great advantage of meeting this wonderful group of people was the ability to travel around China together. Besides exploring the vast city of Beijing, we also took numerous trips outside the city, and explored areas near and far. Trips included day trips out to the Great Wall, to QingTao and to Mongolia. The most memorable of all these journeys was our trip to flat great grass plains of Mongolia.

Among the leisure trips that I made to different parts of China during my 2 month stay in Beijing, the most memorable of all of them was my trip to inner Mongolia.

On this trip we caught an internal flight to Hohhot, one of the largest cities in Inner Mongolia, and from there we took a 3 day, 2 night grassland tour out to the vast great grass plains of Mongolia. We took a day trip from Hohhot by a tour bus to see the great plains and to stay a night inside a “traditional” Mongolian hut called a Yurt.

In Mongolia, they are famous for a few things, namely horse riding across the great plains, so we couldn’t pass up the opportunity to ride a pony across the great plains. Unfortunately they don’t tell you before hand what the term saddle butt refers to. It’s an unfortunate truth that for city dwellers, who never ride a horse, 3 hours on a horse can be a rather painful experience, especially when they put you in a horse where the stirrups are too short, like mine was.

The other major highlight from Mongolia besides seeing the great grass plains and riding a horse was visiting a great sand amusement park built on the edge of the Gobi desert. Think of a snow/ski resort, except instead of snow covered hills, you have massive sand covered dunes and hills. The Chinese basically built this amusement park on the edge of the desert and transformed it into a huge leisure park for its people. It was quite an amazing experience to see the endless sand dunes, and to have a “wonderland” built out on the desert. The trip out to inner Mongolia for 3 days was certainly one of the key highlights of my stay in Beijing. 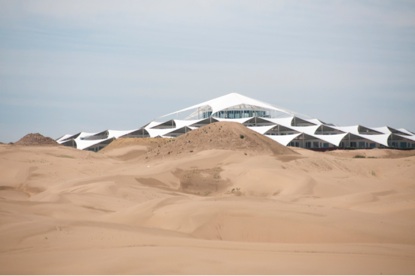 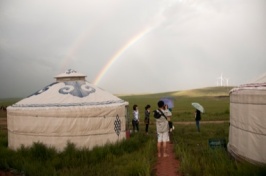 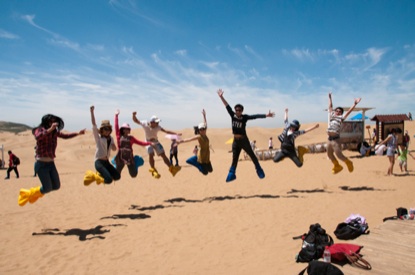 After 2 months of living & working in Beijing it was time for me to pack up and go home. It was an amazing experience to be able to sample working for an amazing Chinese firm and to live in cultural capital of China.
There were so many key learnings during this time in China, however the one that stuck with me the most is that a city is but a collection of buildings, the enduring memory is in making friends with people in order to have the shared experience together.

Mark is a scientist who has spent most of his career working in the pharmaceutical industry in the field of oncology research and biotechnology. After business school, he has made a transition recently to business development for the personal care industry.