Moved by their master’s bravery, 20 of his former disciples immediately changed their minds and courageously decided to follow the elderly Dharma Master to Japan on this praiseworthy missionary trip

For those of you who had visited Japan’s ancient city Nara, you would probably have set foot on the sacred and much visited site of Toushoudai Temple, which was planned, designed and built by China’s Tang Dynasty (618-907 AD) Dharma Master Jianzhen and his faithful followers. Overcoming great risks for their lives and tremendous sufferings, they finally reached the Japanese capital Nara in 754, after having made three hazardous ocean voyages to reach Japan in order to spread the correct precepts and practices of Buddhism there.

Today, this Temple has been well-preserved as a good  example of Tang architecture, despite the vicissitudes of time and calamities of mother nature. No visit to Nara is complete if a visitor did not go there to experience its spiritual splendours and peaceful ambiance. Jianzhen himself is still remembered as the Dharma Master from China who reformed Japanese Buddhism and has become a celebrated household name there.

According to Wikipedia, the term “Dharma” has multiple meanings and includes the cosmic laws and order and the teachings of Buddha and Buddhist philosophy. It is a Sanskrit word of Hinduism origin.

Who was Dharma Master Jianzhen? How did he come to be in far away Japan and what were his accomplishments there to ensure that his indomitable spirit and fame has endured and still fondly remembered by posterity. It is a heroic and moving saga that I would like to share with my viewers.

Jianzhen was born in 688 in Yangzhou, a cultured city then and now, in Suzhou Province. He grew up in a  devout Buddhist family and was therefore immersed in this religion from young. Buddhism’s birth place was in India and spread to China more than two thousand years ago. It can be said that he was destined to become a Buddhist monk from his early teen. Encouraged by his father and after overcoming the initial misgivings of his mother, he enrolled as a novice monk at the famed Dayun Temple there. After about six years as a novice, he was duly ordained  as a monk at the age of 20.

Jianzhen began to travel extensively in this region and beyond in order to further his knowledge of Buddhism and mastering all the precepts and correct practices at various temples. Thus, he gained a good insight into how it would enrich the lives of both his fellow monks and followers. He also delivered lectures regarding the various precepts of the Buddhist faith to varied audiences. His reputation grew and he became known as a Dharma Master of Buddhism.

The Tang Dynasty was at the epitome of Chinese civilisation. Its capital in Changan (now Xian) was the most advanced and largest city in the world, with a population of about one million inhabitants. In their midst were more than ten thousand foreigners who had come from all over Asia in order to admire its splendours and to learn and trade with this cultured, developed and prosperous capital of China.

The Japanese’s contacts with China date back to the Han Dynasty era (206 BC to 220 AD). It had always looked upon this much larger and more advanced country with awe and admiration and was convinced that for their own country to progress it was imperative that they must adopt the more superior Chinese language, culture and art, Confucian heritage, customs, system of government and other social and public institutions for their own society. The Japanese Government therefore sponsored batches after batches of government officials, scholars, Buddhist monks, medical personnel, craftsmen and technicians who were the creme de la creme of their society, to embark on hazardous sea voyages to China in order to learn from that country for the benefit of Japan. Sadly, many would perish at sea and never reached China or returned to Japan on their homeward journey.

Thus, many Japanese monks would remain in China for long periods, travelling widely to learn the correct Buddhist precepts and practices from venerated Dharma masters and ultimately, by royal command, to invite the most eminent and dedicated among them to undertake the highly hazardous missionary journeys to Japan in order to correct the incorrect precepts and practices of Buddhism which were prevalent there. As a concrete example, many of the so-called Japanese monks were in fact laymen disguised as monks because of the many privileges and reverence accorded them by the community.

Of the Japanese monks sent to China, the most serious and learned among them were Yoei and Fusio who had been in China since 733. After having served in several temples helmed by Dharma masters, they began to travel extensively to search for one of  the most eminent of them to undertake the perilous missionary ocean journey to Japan. They succeeded in selecting a few potential candidates but, to their great disappointments and despair, all politely declined their invitations as they feared they would perish at sea and never reached the distant Japan.

Fortunately for the two Japanese monks, one of the Chinese monks, Daohang, came to their rescue when they felt they had let their Emperor down despite their all out efforts to accomplish their assigned task. Daohang, who was a former disciple of Dharma Master Jianzhen, suggested that their best hope would be to go to Yangzhou to persuade this highly respected elderly Chinese Dharma Master Jianzhen to go to Japan. Accompanied  by this Chinese monk, they went to Jianzhen’s temple to seek his help.

When Jianzhen found out the laudable mission of the two Japanese monks, he immediately invited many of his own outstanding former disciples, who had become very successful monks in various temples in Yangzhou, to meet them.

After telling them about the two Japanese monks’ missionary task in China, Jianzhen began by asking for volunteers to undertake this unusual and challenging Japanese mission. After a prolonged silence, one by one they declined to volunteer as they might perish at sea. After telling them his disappointment at their lack of courage and conviction for this mission to promote Buddhism, he stunned all present that he would go to Japan. Moved by their master’s bravery, 20 of his former disciples immediately changed their minds and courageously decided to follow the elderly Dharma Master to Japan on this praiseworthy missionary trip. Both Joei and Fushu were so delighted that their royal mission had been accomplished that they spontaneously knelt down to Jianzhen to show their gratitude for his magnanimous Buddhist spirit despite his advanced age of 56.

After the Chinese Emperor’s permission was obtained for this missionary trip expeditiously through the influence of a senior Court official, Jianzhen wasted no time in raising the necessary funds to build a ship for his expedition and recruiting the ship’s crew, medical personnel, craftsmen as well as stocking up sufficient provisions and medical aids needed for this long and dangerous ocean voyage. He was accompanied by 34 others, including Dao Hang, other former disciples and the two Japanese monks, on this epoch-making trip to Japan.

Just as Jianzhen and his party was ready to embark on this journey from a port in 744 unexpected legal complications with the local government authorities held back their first attempt to sail to Japan. As continuing bad luck would have it, their second attempt too was frustrated by unfavourable weather conditions.

Jianzhen and his party finally set sail one year later with trepidation and prayed for a safe and smooth journey to far away Japan. A number of days after sailing , their ship was wrecked by the treacherous sea and they survived by hanging on to the ship’s debris planks before being rescued by local  government officials. They were hospitably accommodated in a temple there before returning to Yangzhou to prepare for another sea journey.

Three years later Court permission was granted the second time, but unfortunately unfavourable weather conditions again forced them to abandon this journey and took refuge in another temple in a different part of China. While there Jianzhen wasted no time in preaching Buddhism and preparing for their fifth attempt to reach Japan. By then, some of his followers had  already left the party but were augmented by new recruits.

Far from bowing to the forces of nature and other mishaps which plagued this brave undertaking, the indomitable Jianzhen was determined to fulfil his Buddhist mission to reach Japan. At his 5th attempt to do so, his ship went far off course after more than three weeks at sea in the southern direction towards the remote Hainan province.  Water and  provisions ran out and they had to do with without them until they sighted the shores of this province. They were again well received by local officials and inhabitants during their year-long stay there. Undeterred, Jianzhen continued his daily work of spreading Buddhism to the islanders while waiting for more favourable weather conditions to go to Japan. He converted many to Buddhism.

After Hainan, the Dharma master and party travelled extensively on their way to the well-developed Guangzhou, the capital of the southern Guangdong Province. Again they were most welcomed and treated as honoured guests by both officials and local inhabitants. While there, Jianzhen was introduced to the head of the Japanese government delegation to China and he and his fellow officials were returning to Japan after completing their mission in China.

After finding out Jianzhen’s Buddhist missionary trip to his country and the mishaps he had encountered on this laudable mission, the Japanese diplomat was moved and spontaneously invited him and party to travel with him as he had a fleet of four spacious and well-equipped ships. He gratefully accepted this unexpectedly kind offer and shared the good news with his party.

Jianzhen and his party left Guangzhou for Japan. By then, he had become blind due to an eye disease and one of the two Japanese monks, Joei, had already died a year earlier in China without seeing his beloved Japan again. HIs party of  35 were greatly relieved to see the shores of Japan. They then travelled inland and arrived at their final destination Nara, the royal capital of Japan, and were received royally by a high level delegation representing the Emperor himself, a rare honour normally accorded only to a top foreign dignitary.

What were his obstacles and achievements in Japan? The following will briefly summarise them:

Soon after his death in 763, a Japanese delegation brought the news of his demise to the Dayun Temple in Yangzhou, from where he embarked on his first aborted missionary journey to distant Japan. The monks there were so saddened that they held three days of prayers to bless his departed soul. 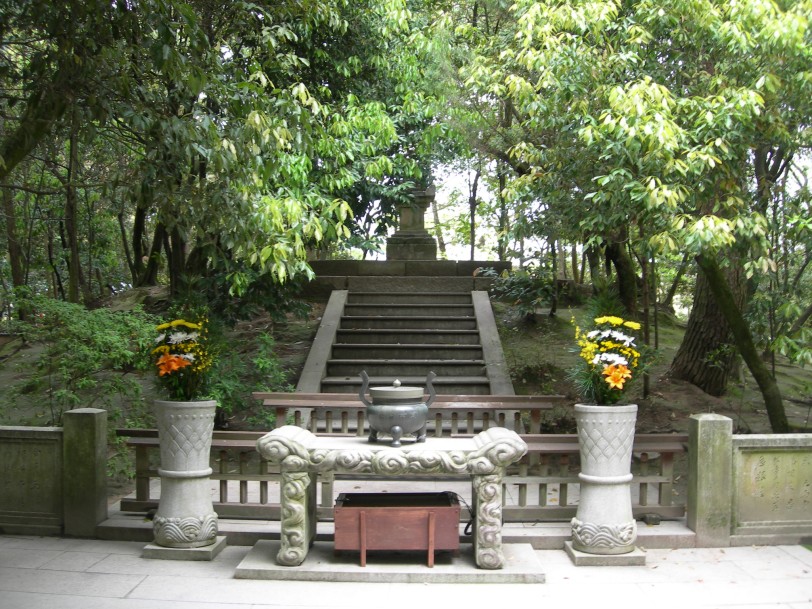 Not long after Japan and China re-established diplomatic relations, with the full blessings of both governments, the real life lacquered portrait of Jianzhen, created by a renowned Japanese sculptor just before the monk passed away, returned to China in 1980 by air for a 23-day exhibition in his native Yangzhou and the capital Beijing. More than 500,000 people of all walks of life paid homage to the monk’s portrait, which is designated as a National Treasure of Japan. At the opening of the exhibition in Beijing, which was attended by leaders of both countries, foreign diplomats and others, China’s redoubtable Paramount Leader Deng Xiaoping proclaimed Jianzhen as one of China’s greatest goodwill ambassadors of all time.

In writing this article, apart from my own interest and little knowledge of Jianzhen, most of my sources of information, both in Chinese and English, come from the Internet and elsewhere. My special thanks are due to Chinese author Xu Feng Yi for his book in Chinese entitled “Jianzhen Dong Du” and to Tzu Chi Society of Taiwan for their wealth of published information on this remarkable Chinese Dharma Master’s work in China and Japan.