This article first appeared in Singapore’s The Sunday Times on December 22, 2002.

China’s 900-year-old national art collection, one of the greatest known to mankind, has survived the test of time despite its turbulent history. Now housed in a splendid fortress-like museum complex in Taiwan, this imperial collection was the brainchild of the creative Song Emperor Huizong, with successive Chinese emperors contributing to it. It reached its full glory during the long reign of Qing Emperor Qianlong in the 18th century. The collection became a national treasure in 1925, after China’s Nationalist government, the Kuomintang, evicted the last Qing emperor from the Forbidden City in Beijing. 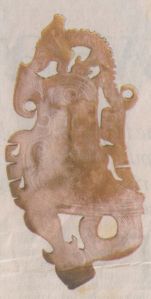 For the first time, the public was allowed to view these superlative treasures. Moved to other parts of the country in 1948 to prevent their falling into the Chinese communists’ hands, the bulk of the collection was finally removed to Taiwan in three dramatic and hazardous sea voyages. The treasures were carried on board Kuomintang warships and escorted by the United States’ seventh fleet, shortly before Nationalist rule on the mainland ended in 1949 with the founding of the People’s Republic of China. Altogether a mind-boggling 500,000 pieces of the choicest art encompassing all periods of Chinese history, ranging from paintings, calligraphy, bronzes, porcelains, jades, sculptures, lacquers, enamels and textiles to documents, books and writing materials, arrived there safely. The lesser ones were left behind in Beijing. The collection has become a top tourist attraction in Taiwan and a must-see for discerning visitors. But the question is: Does Taiwan’s regime have the legal right to retain the Chinese national collections when it is no longer the legitimate government of China? The compelling answer ought to be no, but in this particular case, political considerations were allowed to override legal or moral considerations.

Until 1971, the Taiwan regime, backed powerfully by the US and its supporters, had managed to cling on successfully to its United Nations membership and a permanent seat on its Security Council instead of relinquishing them for China, thus denying the most populous nation on earth its indisputable right to represent the Chinese people in that important world organisation. This was the genesis of the Two-China policy: It was devised by the detractors of China to justify the absurdly artificial propping up of a discredited Nationalist government in Taiwan, whose jurisdiction extends to only a fraction of China’s territory and population, as the lawful representative of the whole country. In view of its success in the UN over China, Taiwan was emboldened to believe that it had every right to be the legal custodian of this priceless national heritage of the Chinese people.

Did China formally seek the return of the treasures to their original home in Beijing? It did not do so, presumably because it took the longer term view that this episode was only a domestic affair which would sort itself out when the two territories were reunited at the appropriate time.

Be that as it may, whatever justification Taiwan believed it had to keep this unique collection would have evaporated when China was admitted finally into the UN in 1971 by majority votes, and Taiwan was expelled from it. In view of this watershed event, China’s right to reclaim these national treasures, whether under its own law or international law, was beyond doubt. However, as Taiwan would never voluntarily return them to the rightful owner, the most likely way that China could recover them would be through negotiation or third-party mediation when the time is ripe to do so. As China has always regarded Taiwan as a breakaway province under a hostile regime, and has put relentless pressure on it to accede to its “one country, two systems” formula for reunification, it obviously does not view the return of this collection as a pressing issue; it could be satisfactorily resolved easily if and when the foremost issue of reintegration is accomplished.

In reality, however, Taiwan is acutely aware of China’s legal right to repossess the collection. This is clearly reflected in the written guarantee that it seeks from other countries, as a condition for lending some pieces out for exhibition, that they would, under no circumstances, surrender them to China if requested by it to do so. Some Taiwanese elites have suggested naively that their government should agree to repatriate this priceless collection to Beijing only if China would consent to set Taiwan free as a separate and sovereign country. This is wishful thinking and is an unrealistic solution to a more important and complex question of reunification of two seemingly irreconcilable protagonists.

What would be the fate of the national treasures if Taiwan did unilaterally declare independence, which it has threatened repeatedly to do so, and assuming that it got away with it due to external factors beyond China’s control? In such a scenario, it would have absolutely no other viable alternative but to return the collection honourably to its lawful owner. Failure to do so would place Taiwan in an untenable position internationally and incur the condemnation of fair-minded people everywhere. Ultimately, this unique national collection, whether it resides in Beijing or Taipei or by rotation in both will, in my view, be determined politically. It is hoped that it will always remain the inalienable heritage of the Chinese people in a unified China for the benefit of mankind.

Update: Developments leading to the improved cross-straits relations between mainland China and Taiwan

After Taiwan’s President Chen Sui Bian stepped down from his presidency on completing the maximum two terms, Ma Ying Jeou of the opposition Nationalist Party succeeded him and pursued a cross-straits policy towards China which was entirely different from his predecessor.

President Chen was actively and stridently advocating for the separation of Taiwan from China and threatened to declare UDI (Unilateral Declaration of Independence) if China chose to oppose it. China then stated categorically that Taiwan is, and has always been, an inalienable part of its territory and would not hesitate to go to war with it if it persisted in seceding from the motherland.Tensions mounted between China and Taiwan and war between them became a distinct possibility. This would inevitably bring in the United States which has a defence treaty with Taiwan. Such a conflict would have devastating consequences for all sides. Before the party in power could carry out its declared intention into fruition, Chen’s successor lost the presidential election and President Ma’ newly elected Government cautiously but firmly opposed to Taiwan becoming a sovereign nation. Thus, a frightful war was timely averted. Be that as it may, Ma’s Government was content to maintain the status quo with China, and did not, for prevailing political reasons, made its stand on the eventual unification with China abundantly clear.

Instead, Ma’s administration gradually but steadily improved diplomatic relations with China, especially in the fields of trade and cross-straits economic investments, tourism and cultural relations. This benefitted both sides and greatly uplifted the stagnant Taiwanese economy as the gigantic mainland market was now much more accessible to it than was the case with the previous regime under President Chen. As a result, the cordial China and Taiwan relations have reached an unprecedented new height.

Reverting to the invaluable Chinese Imperial fine arts collection originally housed in Beijing, which the defeated Chinese Nationalist regime removed to Taiwan when its defeat became imminent, I have stated in my above blog article that the ultimate ownership of this Chinese national treasure would, when the time is ripe, be settled amicably between the both sides provided they eventually reach a compromise solution on it, on the premise, of course, that Taiwan would achieve mutually acceptable terms for reunification with the motherland. My confidence in this happening remains firm and unchanged.

As a small step forward in this direction, and as a gesture of goodwill towards Taiwan, in 2009, China lent 37 of its finest imperial porcelain pieces of the Emperor Yongzheng’s reign housed in Beijing’s Palace Museum to the Taiwan Palace Museum for a prolonged exhibition there. This was very well received by art lovers in Taiwan. In addition, Taiwan’s Palace Museum director accepted an invitation to make an official visit to Beijing’s Palace Museum in order to cement further the growing tie between the two national museums. However, Taiwan did not reciprocate this goodwill gesture in the absence of a firm written guarantee that its own lent exhibits would after the exhibition in Beijing be returned to its rightful owner in Taiwan. China probably felt that the time was not yet opportune to settle once and for the ownership of this important Chinese national heritage collection as a domestic matter until unification has been accomplished.