Historically and continuing into the present era, vagrants and beggars have always been a common sight in countries of the less developed parts of the world and they have always been treated as social outcasts with little help from their governments to improve their wretched existence. But, today, they are no longer alone in bearing this undignified human stigma, as their counterparts also have become an increasingly familiar sight  in many of  the world’s richest countries like United States, Canada, Western Europe and Japan.

This growing worldwide social phenomenon has been  aggravated by the severe worldwide economic recessions,  especially since the financial crises of the 1990s and the even more damaging one in 2008. The lingering impact of the latter is still with us today. These traumatic happenings have led to millions of people losing their jobs and being deprived of their homes due to financial defaults and other causes. I fear that vagrancy and homelessness that we see today has become a sign of our time and a true reflection of the human society in which the rich tend to get richer and the poor become poorer. Such a stark reality of life is partly attributable to ill-conceived government policies, incompetence and lack of integrity of the business community, people living above their financial means, rampant corruption and incompetent and self-seeking political leadership in many countries. For instance, many developing countries are wasting their finite resources on colossal military spending, extravagant infrastructures and dubious prestigious national projects, believing erroneously that these would enhance their international standing, instead of using their precious financial resources to alleviate poverty, to upgrade their people’s skills and to lift their standards of living. While some destitute people can be helped along temporarily by a nation’s charitable and welfare bodies and with some degree of governmental assistance, ultimately, it requires farsighted and resolute national efforts to endeavour to overcome these monumental social problems. In the mean time, it is truly tragic that, every winter, hundreds of thousands of people from all over the world are dying from hunger or lack of an adequate roof over their heads.

What had been done in recent years by different nations to tackle these heightened social ills? In Canada, the electorate of Toronto had made vagrancy an urgent election issue and urged politicians to rid the city of this national shame in a land of abundance. In New York, stricter law enforcement had driven numerous vagrants from public places. Despite that, thousands of them still haunt the landscape of Manhattan and other posh precincts, where the rich and famous reside. There has also been a significant rise in vagrancy in the other rich counties like Germany, France, Italy and Australia, which had prompted their governments and charitable bodies to resort to more effective legislative measures and other ways to help them lead a more decent life ahead. In the poverty-stricken nations of the world, the destitute people are quite resigned to their unkind fate as their governments seem powerless to help them ease their poverty to a more acceptable level.

From my observations, cultural factors do influence the level of vagrancy and begging in different countries. It seems to me that societies with stronger family ties are more likely to take care of their hapless family members in times of dire needs, whether for altruistic reasons or for fear that they would otherwise bring disgrace to the family collectively. Conversely, in communities which emphasise more on single family concept and governmental handouts and less on one’s obligations to one’s kith and kin, there is a lesser sense of guilt or collective shame for one’s failure to help the latter when misfortunes befall them.

In the final analysis, to enable one’s citizenry to live a more humanly decent life must be the goal of all governments, and it is therefore up to each country to formulate its own policies and strategies best suited to attain this laudable objective.

With better education, acquisition of higher skills, sustained economic development and good governance, a better life for all should emerge over time, as Singapore has already shown the way within a relatively short time by progressing from a Third to a First World country with near full employment.

A great deal has already been written about the horrifying lives of the vagrants and beggars in poor countries such as India, the second most populous nation after China, and in other countries which I had personally seen and they no longer make headline news nowadays. My aim therefore is not to elaborate on their continuing plight or suggest a solution in this article. Instead, I would like to share with my viewers my personal experiences and initial shocks when I first came across vagrancy and beggars in rich and advanced countries like United Kingdom, United States and Japan, whom the Third World countries have always looked upon as role models for their own future developments.

Take the case of Britain first, where I was a resident  for four years and had since visited it many times in the past decades. I first came across vagrants and other homeless people of both sexes in the 1970s, with their temporary shelters beneath the famed London Bridge and other bridges including the Chelsea and Battersea bridges. Some of them told me that the police would chase them away in more public places but would not interfere with their spending the night under the bridges away from the public glares. Some were obviously quite well educated but had lost their jobs and homes for various reasons and causes. Most were living on their limited savings until they could be gainfully employed again. They were unable to find shelters in charitable establishments as they were always full. I later came across many other vagrants in petrol stations late at night or sleeping in obscure streets and side lanes not  usually covered by policemen on their night rounds. The more desperate among them would live on the unconsumed food left by customers at eating places out of the kindness of their kitchen staff. I did not come across many beggars at busy public places as begging was an offence in Britain. In my last visit to many parts of the country, there was a more visible sign of vagrancy and homelessness in the several towns and cities that I visited. 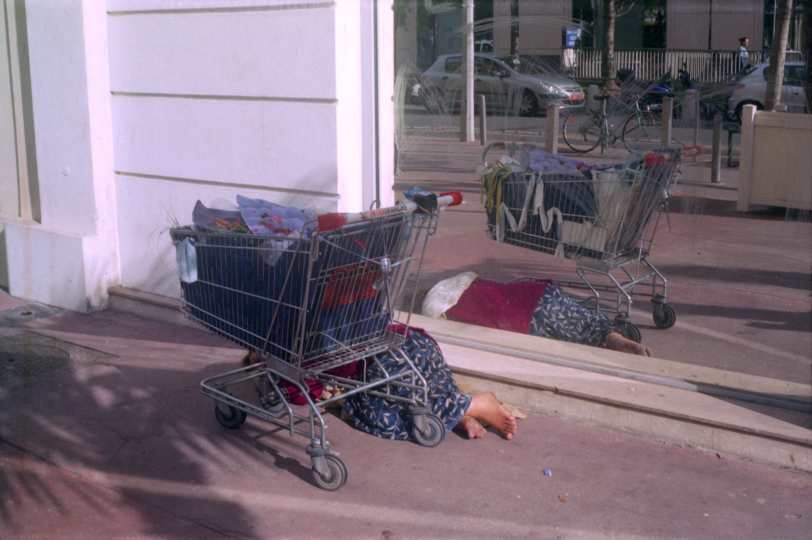 I also came to know parts of the United States reasonably well. Two of my sons graduated from the universities there and one of them now has a computer software business in the heart of the Silicon Valley in California. My fist visit to San Francisco in the 1980s was a real eye-opener for me and my wife. In the bustling downtown areas there were many vagrants and beggars in shabby attires and they openly appealed to those more fortunate than they were to drop some money into the coin box or cap in front of them so that they could solve their hunger pangs. I could hardly believe what I had seen happening in the most powerful and richest country on earth! What I had witnessed in San Francisco was reflected in other major cities like Los Angeles, Chicago, New York and  Houston. In my subsequent visits to this country, I saw a growing number of vagrants, both in California and in other states. The number of males far outnumbered the females. I was somewhat surprised that many female vagrants were young women, some with a child or two in tow.

After the devastating 2008 financial crisis which wrecked havoc on the US economy, the vagrant population escalated further and they were a common sight even in well-off cities in the San Francisco Bay Area. In my last visit there in recent years, I was astonished to see many of them even in downtown Palo Alto, one of the most affluent cities in the US and the incubator of Information Technology billionaires who work and reside in their luxurious properties. One unique feature of the American vagrancy is that many of them in fact still had their cars with them as old used cars can be bought very cheaply and they could more conveniently and comfortably serve as their temporary homes and shielded them from the cold weather there and unwelcome public attention. Interestingly, there was a recent heated public debate in California as to whether this practice should be legally banned by the local authorities. As far as I know, no official decision has, to date, been made on this seemingly unusual public protest.

Japan is one of the most disciplined and orderly countries that I came to know well over the years. I had never encountered any vagrants and beggars in Tokyo or other major cities until about ten years ago. The prolonged financial downturn of the past decade had taken its toll on its national economy and numerous Japanese had lost their jobs and homelessness had become more widespread due to financial defaults and other causes. Revisiting Tokyo after a lapse of few years, I was saddened to see more destitute people in makeshift cardboard shelters and sleeping in the long underpasses leading to the busy underground subway stations. They were all men. None of them approached the passing passengers to solicit  for financial support. They remained dignified even in the face of adversity, in stark contrast with their counterparts elsewhere. I saw even more of these homeless Japanese at the secluded parts of public parks, living in neat self-constructed tents complete with stools or mats for reading and stoves for cooking. They did not seem to stay idle there during the day and would go about looking for any kind of jobs available and, in the mean time, would live frugally on whatever money they had. Their presence in subway underpasses and public parks was tolerated by the authorities in those difficult times but they had to abide by certain conditions laid down by the relevant authorities. They maintained their sense of self-pride and admirable social behaviour, which was so much in evidence for all to see during the serious Kobe earthquake and in the recent more devastating Fukushima tsunami. I salute the human dignity which the Japanese vagrants had displayed in times of tragedies and this should inspire the rest of mankind to emulate their fine human spirit when unkind fate occurs.

4 thoughts on “Is World Vagrancy a Sign of Our Time?”